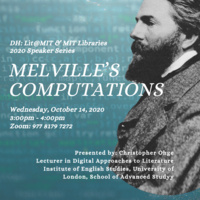 Herman Melville had a fascination with numbers and patterns––a penchant for quantification. Quantities appear frequently in Moby-Dick and in Melville’s other writings, and mathematical ideas appear in marginalia to his books. Yet Melville also engaged with computation as a pre-digital concept of cognition, inheriting the Latin concept of computus as a means of calculating. I call this thinking his ‘reckoning’, in the double-sense of counting (quantification or pattern-seeking) and accounting (narration). How can computation reveal aspects of Melville’s reckonings?

Through a series of recent experiments using computational approaches to analyse Melville’s reading, his allusions, and his style, I will argue that Melville’s computations are central to his writing and philosophical outlook. Like Thoreau, Melville’s early experience in surveying trained him in mathematical and physical engineering skills. Displaying a tension between a priori mathematical calculation and the stark contingencies of the natural world, Melville’s reckonings navigate between these two elements of computation to forge a dynamic spiritual outlook. I will also meditate on the methodology of reading literature with computers, distinguishing between encoding and decoding of literary texts for critical insights.

Christopher Ohge is Lecturer in Digital Approaches to Literature at the Institute of English Studies, University of London School of Advanced Study. He also serves as an Associate Director of the Herman Melville Electronic Library. Previously he was an Associate Editor at the Mark Twain Papers & Project, where his collaborative editorial projects included the final volume of the Autobiography of Mark Twain (2015), Mark Twain: April Fool, 1884 (2017), and the forthcoming critical edition of the Innocents Abroad. Other writings have been published in the Routledge International Handbook of Digital Humanities Research Methods, Mark Twain Annual, Leviathan,“This Mighty Convulsion”: Whitman and Melville Write the Civil War, Scholarly Editing, and elsewhere.