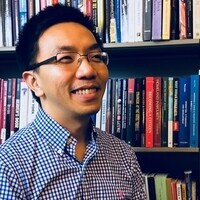 Van C. Tran, Assistant Professor of Sociology at Columbia University, is a sociologist whose research and writing broadly focus on the incorporation of Asian and Latino immigrants and their children, as well as its implications for American culture, politics and society. Within this area, his contribution lies in the study of the immigrant second generation (i.e. children of immigrants born in the U.S.) and how ethnic neighborhoods and cultural processes shape social mobility among second-generation Asian and Latino/a Americans.

His research has been published in both sociology and interdisciplinary journals, including Social Forces, International Migration Review, Ethnic and Racial Studies, City & Community, Russell Sage Foundation Journal of the Social Sciences, and The Annals of the American Academy of Political and Social Science. His scholarship has been recognized with awards from the Section on International Migration, Section on Latino/a Sociology and Section on Community and Urban Sociology of the American Sociological Association.

Tran was born in Vietnam and grew up in Thailand before resettling in New York City as a refugee in 1998. He developed his interest in immigration and urban inequality as an observer of the city’s many diverse communities.