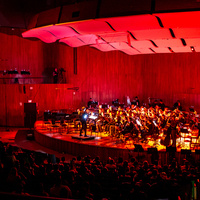 For MIT’s Annual Family Weekend Concert, MITWE and MIT FJE feature music transformed from its original form, including Copland’s Down A Country Lane (heard in its original version for solo piano and also transcription for wind ensemble), Sousa’s The Thunderer followed by Ira Hearshen’s After The Thunderer, an adagio take on the famed piece, fresh arrangements of works by jazz mavericks Ellington, Mingus, and Monk, and a surprise arrangement of a Beatle’s classic.

The world premiere of Fanfare for the Uncommon in Common by MITWE alumnus and MIT Lecturer in Music, Benjamin Park, and Robert Russell Bennett’s beloved Symphonic Songs for Band round out this special celebration of diverse music.