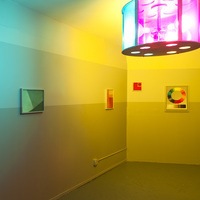 Becca Albee (born Portland, ME) is a Brooklyn-based artist whose photo-based installations often emerge from her encounters with historical materials, whether from a personal archive, official repositories, or the public realm. Investigating how information is disseminated and filtered through physical material such as books, newspapers, and photographic negatives, Albee’s work addresses the mechanisms and politics of representation, foregrounding residues that are often left out of grand narratives. Prior to her work as a visual artist, Albee was an original member of Excuse 17, a punk band influential in the Pacific Northwest riot grrrl scene of the early 1990s. Her commitment to feminist politics and activism plays a central role in her studio practice.