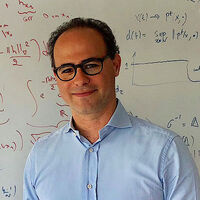 Title :  The monomer-dimer model and the Neumann GFF

We study the dimer model in which particles on the boundary are allowed to form monomers with some fixed weight z > 0 called the monomer fugacity. A natural question is to show conformal invariance in the scaling limit of the associated height function. We prove that on the upper half plane and on infinite strips the scaling limit is given by a Gaussian free field with Neumann (or free) boundary conditions on the part of the boundary containing the monomers, for arbitrary fixed fugacity z > 0.

The starting point of the proof is a bijection due to Giuliani, Jauslin and Lieb to a dimer configuration on a graph which is however nonbipartite. Applying classical Kasteleyn theory we are led to the analysis of a ”random walk” on a graph but where some transitions have negative rates. Nevertheless, using fine properties of an auxiliary random walk (which boil down to describing precisely the oscillations of its potential kernel) we are able to give a meaning and analyse the scaling limit of its Green function, eventually leading us to the result.