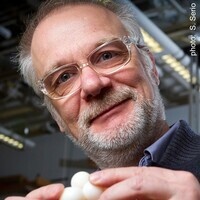 Concentrated suspensions of small particles in a liquid have become an active area of research for the investigation of non-Newtonian flow behavior, where the material’s response to shear depends strongly on the intensity of forcing.  This talk will highlight some of the remarkable, counter-intuitive properties of these seemingly simple materials, focusing on their ability to transform, reversibly, between fluid and solid-like states. While earlier work associated the associated dramatic jumps in viscosity with purely hydrodynamic interactions between the particles, recent experiments and simulations have demonstrated the importance of direct frictional contacts. I will show how this opens up new opportunities for designing the dynamic stress response of dense suspensions by controlling the particles’ surface properties.

Heinrich Jaeger is the Sewell Avery Distinguished Service Professor of Physics at the University of Chicago. He received his Ph.D. in physics in 1987 from the University of Minnesota, working with Allen Goldman on ultrathin superconducting films. After a postdoc at the University of Chicago, he moved to the Netherlands in 1989 to take up a position as Senior Researcher at the Delft Institute for Microelectronics and Submicrontechnology. He returned to the University of Chicago and joined the faculty in 1991, directing the Chicago Materials Research Center from 2001 – 2006, and the James Franck Institute from 2007-2010. Jaeger’s current research focuses on self-assembled nanoparticle-based structures, on the rheology of concentrated particle suspensions, and on studies of the packing and flow properties of dry granular materials.