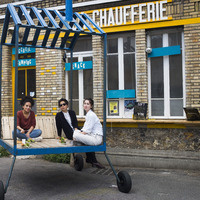 Not Built to Last: Disrupting planning outcomes through temporary placemaking

"Les Grands Voisins" ("The Great Neighbors") was a temporary occupancy project at the decommissioned Saint Vincent-de-Paul Hospital in central Paris. Home to over 600 new immigrants and at-risk individuals; budget office space for over 250 NGOs, artists, and startups; plus workshops, community gardens, camping facilities and resident-led programming, the site hosted roughly 1500 employees and up to 2000 local visitors each day. The project was slated for demolition in 2017, but the City of Paris has decided to continue the project as an "urban laboratory" until 2023 to help determine future uses on the site.

The case study of Les Grands Voisins provides a model for how temporary use can address many social, ecological, community, and design challenges currently facing urban planners. It also demonstrates what obstacles may be faced when planning temporary projects at the city scale.

Join us for "Not Built to Last", a presentation on Les Grands Voisins by two of its founders, Zofia Basista and Aurore Rapin, followed by a discussion with Dan Campo, author of The Accidental Playground, Dan D’Oca, Founder of Interboro Partners, and Professor of Urban Design at the GSD, and Garnette Cadogan, DUSP MLK Scholar.