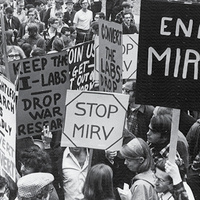 Join us for this exciting screening of the fully restored film by pioneering filmmaker Richard Leacock on the 50th anniversary of one of MIT's most significant campus protests in its history occuring between November 3rd and 5th, 1969. The screening will be followed by Q&A with participants of the protests and Leacock's associates, reflecting on the significance of the events and of Leacock's groundbreaking film making.

Richard Leacock was a prolific filmmaker who pioneered documentary styles known as Cinéma Vérité and Direct Camera by using small, mobile, hand-held cameras to capture moments of immediacy and spontaneity. He was a seminal figure in developing innovative approaches to nonfictional filmmaking, co-founding and teaching at MIT’s film school from 1968 through 1989.    FROM MIT's LIST CENTER

CO-SPONSORED WITH THE MIT MUSEUM.