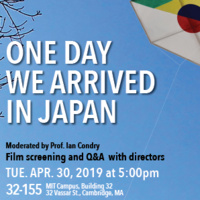 One Day We Were in Japan: Film screening and talk back

An intimate epic spanning 10 years and 10,000 miles, One Day We Arrived in Japan reveals how people’s dreams and expectations stand up to a grueling new reality on the other side of the world.

Three Brazilian families leave their homeland in pursuit of a better life in Japan – what will happen to each of them? Over the past 25 years, hundreds of thousands of Brazilians of Japanese descent have gone to Japan. This unique documentary brings to light the gripping personal stories behind a major transnational phenomenon.

Aaron Litvin: Director/Producer/Cinematographer/Editor
Aaron Litvin spent 30 months in Brazil and 30 months in Japan during pre-production and production of One Day We Arrived in Japan. Litvin graduated from Harvard College with a degree in Latin American Studies, earned an M.S. in Sociology from the University of São Paulo, and is a Ph.D. candidate in Luso-Brazilian literature and Critical Media Practice at Harvard University. He was a Fulbright Scholar in Brazil and a Japanese Government Research Scholar at Sophia University in Tokyo.

Ana Paula Kojima Hirano: Director/Cinematographer/Editor
Ana Paula Kojima Hirano spent two years in Brazil and one year in Japan during pre-production and production of One Day We Arrived in Japan. Hirano earned her undergraduate degree in Economics from the University of São Paulo, where she researched global labor market transformations and also studied visual anthropology and cinema. She studied at Sophia University in Tokyo on a Japanese Government Scholarship, and she is currently a Ph.D. candidate in Luso-Brazilian literature and film theory at Harvard University.