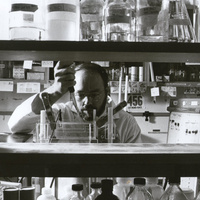 Greater Boston’s beloved Coolidge Corner Theater is hosting a virtual premiere of From Controversy to Cure, a documentary film from MIT Video Productions (MVP) chronicling the biotech boom in Cambridge, as part of its Science on Screen series.

From Controversy to Cure offers an insider’s look at the contentious debate about genetic engineering that erupted in the city of Cambridge in the summer of 1976, bitterly dividing both the science community and local residents. Learn how an unlikely mix of science and engineering, politics, the space race, and urban renewal transformed Kendall Square into one of the world’s most extraordinary innovation clusters—a community now on the front lines of the battle against Covid-19. Learn more on the film’s website.

Following the screening, there will be a special virtual Q&A panel moderated by Antonio Regalado, senior editor for biomedicine at MIT Technology Review, on Tuesday, August 25 at 8pm ET. The panel will include director and MVP Senior Producer Joe McMaster, alongside some of the notable Kendall Square scientists featured in the film, including: