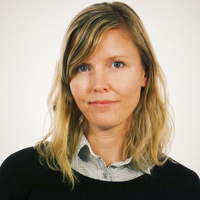 Making i-docs at FRONTLINE: A look back and look ahead

Since 1983, FRONTLINE has been American television’s top long form news and current affairs series. In that time, it has also become known as a digital pioneer within PBS, committed to harnessing emerging technologies to bring their hallmark brand of investigative journalism to new platforms and audiences.

In this talk, FRONTLINE PBS Series Producer and Editor Michelle Mizner will look back on some early examples of the program’s transitions into interactive, multi-platform storytelling, including experiments in form, structure, and viewer experience. We will also discuss specific projects the team has produced recently, such as one that optimizes a rich archive of on-camera interviews used in films, and others that were created as wholly original, interactive stories. What projects and experiments are we excited about next? Join to find out.

Michelle Mizner is Series Producer & Editor at FRONTLINE PBS, where her work for the series spans many storytelling forms. Before joining the staff in 2014, she worked as an independent filmmaker and as a producer for the Museum of Science, Boston. Her interactive documentaries have been recognized by the Peabodys, the Emmys, and World Press Photo.