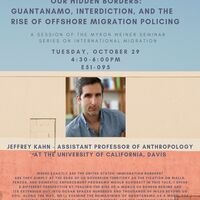 Our Hidden Borders: Guantanamo, Interdiction, and the Rise of Offshore Migration Policing

Jeffrey Kahn is Assistant Professor of Anthropology at the University of California, Davis. His research focuses on issues of migration, mobility, border policing, and sovereignty. Prior to joining the Anthropology Department at UC Davis, Professor Kahn was an Academy Scholar at the Harvard Academy for International and Area Studies, a Robina Foundation International Human Rights Fellow at Yale Law School, and a law clerk to the Hon. Judith W. Rogers of the United States Court of Appeals for the D.C. Circuit. He received his PhD from the University of Chicago and his JD from Yale Law School. Professor Kahn’s work has been funded by the National Science Foundation, the Fulbright program, and the American Society for Legal History. He is the author of Islands of Sovereignty: Haitian Migration and the Borders of Empire (University of Chicago Press 2019).

Where exactly are the United States' immigration borders? Are they simply at the edge of US sovereign territory as the fixation on walls, fences, and domestic enforcement programs would suggest? In this talk, I offer a different perspective by tracing the rise of a mobile US border regime and its extension out into ocean spaces hundreds and thousands of miles beyond US soil. Along the way, we'll examine the reimagining of Guantánamo as a model for flexible, extraterritorial migration control and the intensive litigation battles over the treatment of Haitian asylum seekers that both gave birth to the US asylum system and partially drove it into a space of oceanic exceptionalism. As we'll see, the emergence of offshore interdiction and detention reveals not only hidden features of our contemporary borderscape but the roots of a respatialization of the nation-state itself.