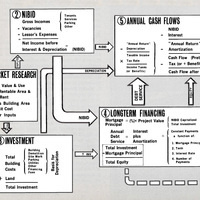 Over the course of the twentieth century in the United States it became increasingly possible to invest in buildings like one might invest in stocks, buying small shares and trading them as easily. The history of finance describes how new financial instruments presented novel ways for individuals, corporations, banks, and pensions to invest in new construction. Following the introduction of the real estate investment trust (REIT) in 1960, the 1970s and 1980s represent a period of experimentation in finance for new construction through REITs, syndicates, and other investment devices. This era of financialization likely influenced the design process, but exactly how is unclear. Architectural historians have rarely paid attention to the influence of finance on design decisions. Nonetheless, coincident changes in architectural practice suggest some potential alignments: architectural firms were growing larger, operating like multi-discipline conglomerates rather than partnerships or boutique ateliers, and seeking work across larger geographies. Understanding how architecture firms in the 1970s and 1980s responded to the potential work backed by these new financial instruments will begin to show how architecture participated in the process of financialization. In this talk, Sara Stevens will explore the parallel changes in large-scale construction financing and architectural practice, positioning architecture at the center of a history of capitalism.

Sara Stevens is an architectural and urban historian. She is an Assistant Professor of architectural and urban design history and Chair of Urban Design in the School of Architecture and Landscape Architecture at the University of British Columbia in Vancouver. Her research focuses on real estate developers of the twentieth century, exploring the cultural economy of architectural practice, finance, and expertise in Canada and the United States. Her book, Developing Expertise: Architecture and Real Estate in Metropolitan America(Yale University Press, 2016), studies real estate development in twentieth century American cities, and how developers, investors, and architects worked together to build subdivisions and superblocks, cul-de-sacs and towers.