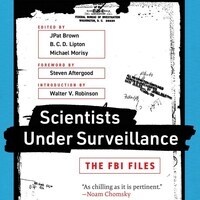 When the Cold War was at its hottest, the FBI cast a suspicious eye on scientists working in a wide range of disciplines. Scientists Under Surveillance gathers FBI files on some of the most famous scientists in America--including Neil Armstrong, Albert Einstein, Vera Rubin, and Richard Feynman--and reproduces them in their original typewritten, teletyped, hand-annotated form.

B. C. D. Lipton is Senior Reporter at MuckRock.

Michael Morisy is cofounder of MuckRock.

For more information about the Cambridge Science Festival, visit cambridgesciencefestival.org.