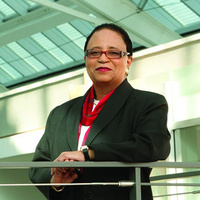 An Evening With Shirley Ann Jackson at MIT

MIT School of Science, School of Engineering, and the National Science and Technology Medals Foundation (NSTMF) host An Evening With Shirley Ann Jackson. Dr. Jackson is the President of Rensselaer Polytechnic Institute, the first African-American woman to receive a doctorate degree from MIT, and a 2014 National Medal of Science Laureate.

Dr. Paula Hammond, the David H. Koch Chair Professor of Engineering and the head of MIT’s Department of Chemical Engineering, will interview Dr. Jackson. The conversation will cover Dr. Jackson’s time as a student at MIT, her current role as President of RPI, her experiences as a woman of color in STEM, and everything in between. The audience will have the opportunity to ask questions of Dr. Jackson following the interview. The program will conclude with a short reception for all.

This event will be accessible by live webcast on Facebook and on this event page! Please visit this Facebook group for more information.

Dr. Shirley Ann Jackson, the 18th president of Rensselaer Polytechnic Institute, is a trailblazer. Dr. Jackson was the first African-American woman to: receive a PhD from MIT in any field, chair the United States Nuclear Regulatory Commission, lead a top-ranked US research university, and win the National Medal of Science. Outside of RPI, she serves on several boards, including FedEx, IBM, and Medtronic, and was previously appointed to the President’s Council of Advisors on Science and Technology and the President’s Intelligence Advisory Council. From theoretical physics to public policy work to transforming RPI, Dr. Jackson’s impact is immeasurable. To learn more about Dr. Jackson, read this, this, this, or this!

Dr. Paula Hammond originally thought she would become a writer, but her favorite high school teacher helped cultivate her interest in chemistry. Since then, she has gone to complete her BS, MS, and PhD in chemical engineering at MIT, Georgia Tech, and MIT, respectively, and start several labs - including MIT’s Institute for Soldier Nanotechnology and the Hammond Lab in the Koch Institute of Integrative Cancer Research. Hammond’s research has a range of practical applications from cancer treatments to energy and fuel cell technology to wound remediation. For more information about Dr. Hammond, read this or watch this!

About the AEW Program

An Evening with Shirley Ann Jackson is the second in a series of events connecting students with NMS and NMTI Laureates. Every Laureate has a unique story, and it is the mission of the NSTMF to share these stories far and wide. It is more important than ever to celebrate the heroes of American scientific excellence who are driving our world forward. By sharing the laureates’ stories and celebrating their diverse backgrounds, the AEW program gives anyone the opportunity to learn from and interact with Laureates and maybe, just, maybe, be inspired to begin their own career in STEM. For more information about the AEW, read this.