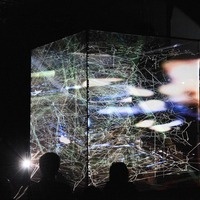 Join the creators of Spider's Canvas / Arachnodrone and guest sound designer Nick Joliat in the MIT.nano Immersion Lab (12-3207) for live demonstrations of this interdisciplinary work at 5:30pm and 6:45pm, with a reception with the artists between the two performances.

The concert premiered in November 2018 as part of Saraceno’s acclaimed carte blanche exhibition ON AIR at Palais de Tokyo in Paris curated by Rebecca Lamarche Vadel, with the programme supported by Festival d’Automne, Paris.

This project emerged from myriad interactions between different disciplines, in an effort to work together—and extend the boundaries of disciplinary knowledge and practices—toward new understandings of emergent human and non-human entanglements. The technical development of this musical instrument was inspired and made possible by the Spider Web Scan—a novel scientific apparatus and technique for generating precise 3D scans and digital models of complex spider webs—first created by Saraceno in 2009/2010 in collaboration with the TU Darmstadt, and more recently refined in Saraceno’s ongoing collaboration with the MIT Laboratory for Atomistic and Molecular Mechanics (led by Markus Buehler). Based closely on a tent-web made by a semi-social South American Cyrtophora citricola spider, the work is not simply interdisciplinary, but quite literally an interspecies collaboration.

Spider’s Canvas / Arachnodrone is a co-production of MIT Center for Art, Science & Technology, MIT Music & Theater Arts, MIT Civil & Environmental Engineering; this installation of the piece was commissioned by MIT.nano, and is hosted in the Immersion Lab, Room 12-3207.