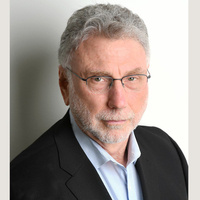 Former Executive Editor of The Washington Post, Martin Baron will be giving this Spring’s Compton Lecture. Over the course of Mr. Baron's eight years at the Post, he oversaw a staff that grew to 1,000 journalists.

In the course of his career, Mr. Baron has led newsrooms to 17 Pulitzer Prizes, including 10 awarded to the Post: four for national reporting; two for explanatory reporting; and one each for investigative reporting, criticism, feature photography and public service.

Previously, Mr. Baron had been editor of The Boston Globe. During more than 11 years with the publication, the Globe won a total of six Pulitzer Prizes for public service, explanatory journalism, national reporting, and criticism. The public service recognition was awarded to the Globe in 2003 for its investigation into the cover-up of sexual abuse by clergy in the Catholic Church. The story of the investigation was told in the 2015 movie "Spotlight," which won the Academy Award for best picture.

Mr. Baron began his journalism career at the Miami Herald in 1976. Three years later he moved to the Los Angeles Times, working his way up from business reporter to business editor and then to editor of the newspaper’s Orange County edition, which then had about 165 staffers. He landed at The New York Times in 1996, soon becoming the associate managing editor responsible for nighttime news operations. Mr. Baron was named executive editor of the Miami Herald in 2000. Under his leadership as its top editor, the Herald won the Pulitzer Prize in 2001 for breaking news coverage for its reporting on the raid to recover Elián González, a Cuban boy at the center of a fierce immigration and custody dispute.

Mr. Baron was born and raised in Tampa, Florida. He graduated from Lehigh University in 1976 with both a BA in journalism and an MBA, having completed a five-year program in four years. His career in journalism has been recognized with numerous honors and awards and he is the recipient of five honorary degrees. He speaks fluent Spanish.

About the Karl Taylor Compton Lecture Series: This lecture series was established in 1957 to honor the late Karl Taylor Compton, who served as president of MIT from 1930 to 1948 and as chairman of the MIT Corporation from 1948 to 1954. The lecture series gives the MIT community direct contact with the important ideas of our times and with people who have contributed much to modern thought.

Have a question for Marty? Please submit your question by filling out this Qualtrics survey.

The Compton Lecture is open to all members of the MIT community. Face coverings are now optional indoors at MIT.

Covid Pass users: No registration required.
Non-Covid Pass users may attend the lecture and register in advance for a Tim Ticket, which will allow visitor access to MIT buildings.