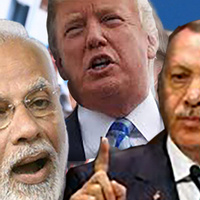 Starr Forum: The Rise of Populism

Experts discuss the growing political trend in US, Turkey, and India

Sana Aiyar is associate professor and the Class of 1948 Career Development Chair of history at MIT. She received her PhD from Harvard University in 2009 and held an Andrew Mellon postdoctoral fellowship at Johns Hopkins University in 2009-10.  From 2010 to 2013 she was Assistant Professor of History at the University of Wisconsin-Madison. Her broad research and teaching interests lie in the regional and transnational history of South Asia and South Asian diasporas, with a particular focus on colonial and postcolonial politics and society in the Indian Ocean.

Pippa Norris on the US

Pippa Norris is a comparative political scientist who has taught at Harvard for more than a quarter century. She is ARC Laureate Fellow and Professor of Government and International Relations at the University of Sydney, the Paul F. McGuire Lecturer in Comparative Politics at the John F. Kennedy School of Government, Harvard University, and Director of the Electoral Integrity Project. Her research compares public opinion and elections, political institutions and cultures, gender politics, and political communications in many countries worldwide.  She is ranked the 5th most cited political scientist worldwide, according to Google scholar. Major honors include, amongst others, the Skytte prize, the Karl Deutsch award, and the Sir Isaiah Berlin award. She is a fellow of the American Academy of Arts and Sciences. Recent publications include a new edited book, on Electoral Integrity in America with OUP, and a book with Ronald Inglehart on "Cultural Backlash" forthcoming with CUP.

Elizabeth Leeds is a senior fellow at WOLA where she advises work on citizen security and human rights in Brazil. She is a leading expert on police reform and other issues of citizen security in Brazil, having conducted extensive research and field work on the topics over the last four decades. From 1989-1997 she was the Executive Director of the Center for International Studies at the Massachusettes Institute of Technology (MIT). As a Ford Foundation Program Officer for Governance and Civil Society in the Foundation’s Brazil Office, 1997-2003, she developed the Democratic Policing Initiative. She is the co-founder and Honorary President of the Brazilian Forum for Public Safety, begun in 2005, which is a leading independent voice on public safety policies and law enforcement in Brazil, facilitating regular dialogue with relevant actors. Currently, she serves as a Research Affiliate at the Center for International Studies at MIT. She received her PhD in political science from MIT.

Free & open to the public | Refreshments served
Can't attend in person? Watch it on Facebook live or on-demand on YouTube.
For more information or accessibility accommodations please contact starrforum@mit.edu.