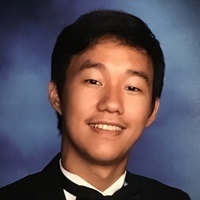 To enter the building, please come to the exterior doors at 160 Memorial Drive and one of our ushers will let you in.

Steven Qu is a junior at MIT studying Electrical Engineering & Computer Science and Mathematics. He currently studies violin with Lynn Chang through the MIT Emerson/Harris Fellowship program. He started playing violin at age seven and previously studied under Holly Hamilton of the National Symphony Orchestra and Barbara Agresti of the Indianapolis Symphony Orchestra.

In the past, Steven has performed as part of the National Youth Orchestra of China, the NSO Summer Music Institute, and the All-Nationals Symphony Orchestra, bringing him to stages such as Carnegie Hall and the Kennedy Center. Currently, he is a part of the MIT Chamber Music Society, where he has played repertoire by Mendelssohn, Mozart, and many others. He also likes to compose in his free time.

Sven Wang is a collaborative pianist and singer, born and raised near Frankfurt in Germany. Growing up, he was a multiple first prize winner at the German youth music competition “Jugend musiziert”. He then pursued his BSc in mathematics and philosophy at LMU Munich before obtaining his master’s and PhD degrees in mathematics at the University of Cambridge, graduating in 2021. Throughout, he kept performing, with a special inclination towards chamber music and song. His musical mentors have included Wolfgang Schamschula, Matthew Schellhorn (piano) and Michael Schopper (voice). He was awarded Cambridge University’s Edith Leigh piano prize. As a scholar of the Pembroke Lieder scheme, he was mentored by song pianist Joseph Middleton. As a tenor, he was part of the Munich Bach Choir and Trinity College Choir, amongst others, and has worked with conductors such as Ben Parry, Hansjörg Albrecht, and Stephen Layton.

When he is not playing music, Sven works as a postdoctoral researcher at MIT in mathematics. One of his long-term goals is to use mathematics to understand biases in our current democracies, and help develop fairer decision-making processes.

About the Emerson/Harris Program for Private Study

Funded by the late Mr. Cherry L. Emerson, Jr. (SM, 1941) in response to an appeal from Associate Provost Ellen T. Harris (Class of 1949 Professor Emeritus of Music), the Emerson/Harris Program offers merit-based financial awards for private study in music to students of outstanding achievement on their instruments in classical, jazz or world music. Each academic year, the Emerson/Harris Program awards Scholarships and Fellowships to nearly fifty students who commit to a full year’s study and participate in the musical life of MIT. Private teacher selections, made in consultation with the music faculty, may include instructors from MIT staff and throughout Greater Boston.