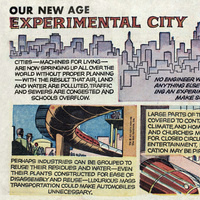 "The Experimental City" is a documentary about the Minnesota Experimental City project, a futuristic attempt to solve urban problems by creating a full-size city from scratch in the isolated woods of northern Minnesota.  At the heart of the story is renowned scientist, inventor and comic-strip author Athelstan Spilhaus, who dreams of a new kind of planned city -- a truly experimental city that continuously changes to find workable urban solutions.  This new city would employ the newest technologies in communications, transport, pollution control, energy supply -- even large-scale domed enclosure -- in an attempt to create more livable cities for the 21st Century.

It was a compelling vision, with powerful backers, hundreds of experts, and its own state agency.  But not everyone fell in line with this newfangled vision for the future...

Sponsored by the Department of Urban Studies & Planning (DUSP) and the Massachusetts Association for Consulting Planners (MACP), with movie snacks and opportunities to network with urban planners and colleagues before/after the show.