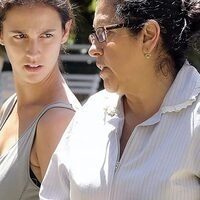 Free and open to MIT community.

Introduction by Joaquín Terrones. Terrones is a lecturer in Literature at MIT.

The film centers around Val, a hard- working live-in housekeeper in modern day Sao Paulo. Val is perfectly content to take care of every one of her wealthy employers’ needs, from cooking and cleaning to being a surrogate mother to their teenage son, who she has raised since he was a toddler. But when Val’s estranged daughter Jessica suddenly shows up, the unspoken but intrinsic class barriers that exist within the home are thrown into disarray. Jessica is smart, confident, and ambitious, and refuses to accept the upstairs/downstairs dynamic, testing relationships and loyalties and forcing everyone to reconsider what family really means.

The MIT Ibero-American Film Series 2022 features five critically acclaimed films by directors from Brazil, Colombia, Venezuela, and Guatemala, with a diverse range of Latin American contexts and perspectives, and in Portuguese, Spanish, Kaqchikel Mayan, and English (all with English subtitles). MORE INFO ON SERIES

This series was made possible with the support of Global Languages, Committee on Race and Diversity, MindHandHeart, Council for the Arts at MIT. Thanks also to MISTI; History at MIT; Literature; Latino ERG; Hermanas Unidas; MIT Program in Women’s and Gender Studies; Program in Science, Technology, and Society; Comparative Media Studies/Writing; and MIT Linguistics.

This series is part of the Spanish Film Club, and was made possible with the support of Pragda, SPAIN arts & culture and the Secretary of State for Culture of Spain.