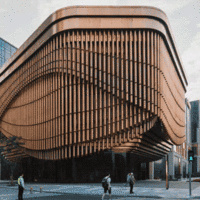 Join us for the capstone event of the 2020 Eugene McDermott Award in the Arts at MIT honoring designer Thomas Heatherwick. This online public program will include a special address to MIT from Thomas Heatherwick filmed in his London studio, premiere a behind-the-scenes documentary telling the inspiring story of his design challenge for MIT students, and a conversation between Heatherwick and Dean Hashim Sarkis, curator of the 2021 Venice Biennale of Architecture.

The Eugene McDermott Award in the Arts at MIT plays a unique role at the Institute by bringing the MIT community together to support MIT’s principal arts organizations: the Department of Architecture; the Program in Art, Culture and Technology (ACT); the Center for Art, Science & Technology (CAST); the List Visual Arts Center; the MIT Museum; and Music and Theater Arts (MTA).