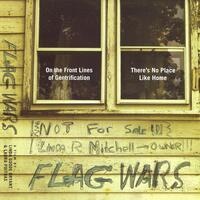 FLAG WARS (2003): Shot over a four-year period, Linda Goode Bryant and Laura Poitras' Flag Wars is a poignant and very personal look at a community in Columbus, Ohio, undergoing gentrification. What happens when gay white homebuyers move into a working-class black neighborhood? As the new residents restore the beautiful but run-down homes, black homeowners must fight to hold onto their community and heritage. The inevitable clashes expose prejudice and self-interest on both sides, as well as the common dream to have a home to call your own. Winner of the Jury Award at the South by Southwest Film Festival, Flag Wars is a candid, unvarnished portrait of privilege, poverty and local politics taking place across America. An Independent Television Service (ITVS) and National Black Programming Consortium (NBPC) co-presentation. A Diverse Voices Project (DVP) Selection.

"One of the things we reveal in Flag Wars is how privilege and prejudice operate simultaneously.  As a lesbian, I am aware that I can be a target for violence and discrimination, however, I am also aware that my class and race privilege open doors for me every day of my life. My sexuality does not erase these privileges....  I especially want Flag Wars to be seen by queer audiences and to raise debate around class and race in the queer community." ---Laura Poitras, Director