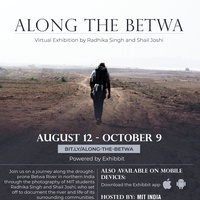 Virtual Exhibition: Along the Betwa

Join us for the virtual photo exhibition: "Along the Betwa", featuring the work of two recent Department of Urban Studies and Planning graduates, Radhika Singh and Shail Joshi (MCP '20).

In late 2018, Veditum, a non-profit research and media organization in Kolkata, had floated a call for applicants to the walk along the Betwa, a river that flows through northern India. Veditum undertakes various research projects in an attempt to bring awareness to aspects of environment, society, and culture that are often overlooked by mainstream media. Radhika Singh and Shail Joshi were two of the four people selected to walk along the Betwa. Their goal was to understand its importance in people's lives.

A quick tutorial to navigate the exhibition can be found here. This exhibition was also kicked off by the webinar "Along the Betwa: Stories on Rivers in Water-Scarce Regions", featuring panelists from Veditum, World Resources Institute-India, and ATREE, and can be viewed here.