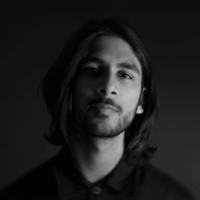 In this talk, augmented reality pioneer Asad J. Malik will share his journey of developing augmented reality as a new medium of expression from interactive experiences at film festivals, to speculative digital assets for a new internet underground. He will give an overview of his work, from his immigration focused Hololens project Terminal 3 which premiered at Tribeca to critical acclaim in 2018, to his current work as the CEO of the AR/Web3 app Jadu.

Asad J. Malik is the Founder of Jadu, a company pioneering at the intersection of AR and Blockchain. Jadu is architecting an AR game-world called the Mirrorverse, built around virtual assets owned by its community of players. He has worked with icons like Serena Williams, Lil Nas X, Pussy Riot, and more. His critically-acclaimed narrative storytelling projects Terminal 3 and A Jester’s Tale premiered at Tribeca and Sundance Film Festivals, positioning Asad as a visionary in the space. Asad was named one of Variety’s 10 Innovators to Watch, Rolling Stone’s Future 25, and Forbes’ 30 Under 30.