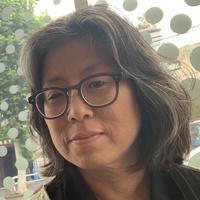 Viewers Like Us: Documenting history, representation, and diversity in public television

Viewers Like Us, a documentary podcast and digital platform that launched in September 2021, unearths the circular history within America’s public broadcasting system, explores who gets to tell America’s multitude of stories, and envisions a future where PBS centers a true diversity of experiences and perspectives in its programming. Filmmaker and podcast producer/host Grace Lee will talk about her own timeline for co-creating Viewers Like Us with a team of reporters, editors and storytellers, and the opportunities for movement building through storytelling.

Grace Lee is a Los Angeles-based independent filmmaker whose credits include the Peabody-winning Asian Americans series as well as POV’s And She Could Be Next, both of which aired in 2020 on PBS. Other credits include the Peabody-winning American Revolutionary: The Evolution of Grace Lee Boggs, Makers: Women in Politics and K-TOWN’92, an interactive online project on the 1992 Los Angeles civil unrest. She co-founded the Asian American Documentary Network and is a Documentary Branch member of the Academy of Motion Picture Arts and Sciences.