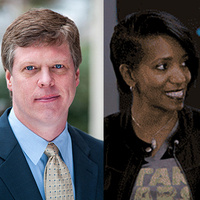 For 82 years, the Peabody Awards have recognized “Stories that Matter” in broadcasting. Peabody has expanded its recognition to interactive and immersive media (games, XR, interactive documentary, and others) by awarding 16 legacy awardees—iconic and pioneering works—to demonstrate the depth of these digital formats and the foundational standards for future award recipients.  Dr. Jeffrey Jones, Executive Director of Peabody, and Diana Williams, chairwoman of the Peabody Interactive Board, will be in conversation with Katerina Cizek, Artistic Director of Co-Creation Studio at ODL, and fellow member of the board.

Jeffrey P. Jones, Ph.D., is the Lambdin Kay Chair and Executive Director of the George Foster Peabody Awards at the University of Georgia. He is the author and co-editor of five books, including Entertaining Politics (2010); Satire TV (2009); The Essential HBO Reader (2008); and most recently, Television, the Peabody Archives, and Cultural Memory (2019). Jones is also a member of the Entertainment and Media Studies Department in the Grady College of Journalism and Mass Communications, where his research interests are in entertainment television and politics. He holds a Ph.D. in Radio-TV-Film from the University of Texas at Austin, as well as a Master’s and Bachelor’s Degree in Political Science from Auburn University.

Diana Williams is the CEO and Co-founder of Kinetic Energy Entertainment, which develops IP and produces creative content for distribution across all storytelling media. Kinetic’s slate includes a series in development at HBO, The Gatecrashers (with Circle of Confusion), the Founder Hustle podcast (based on 1863 Ventures’ work with entrepreneurs of color), Crimson (an epic fantasy/thriller take on Alice in Wonderland), the recipe-memoir Adventures in Starry Kitchen, and Political Arena (a video game project with political journalist Eliot Nelson). An award-winning multi-platform producer, Diana built her career in narrative/scripted film and documentary, as well as consulting for studios and streamers. She was the Creative Development/Franchise Producer at Lucasfilm on the team responsible for developing and maintaining narrative cohesion and connectivity throughout the Star Wars universe, and was a key member of the team that launched ILMxLAB, an immersive entertainment and mixed reality laboratory. Diana is a graduate of Georgetown University.